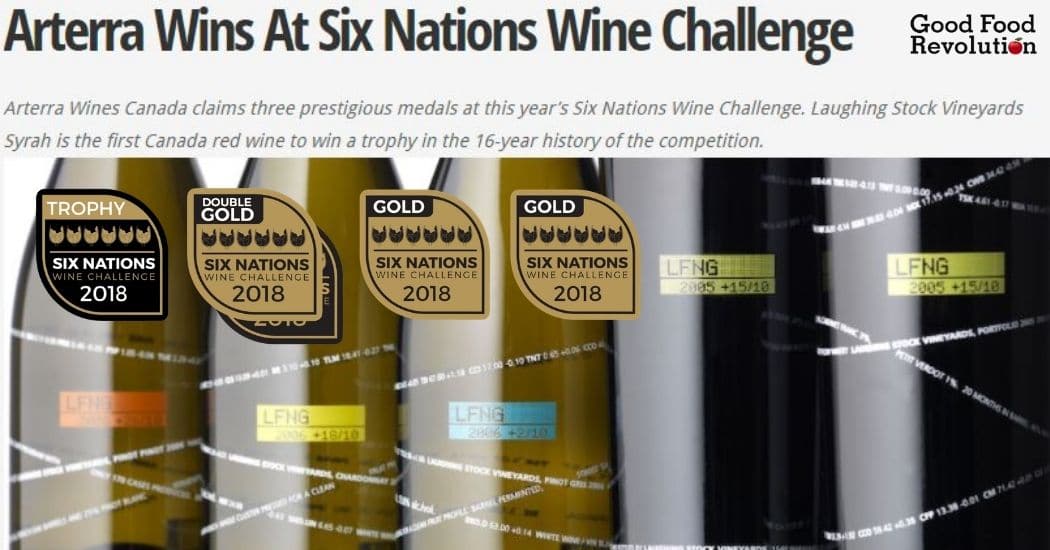 “There were of course some surprises this year – Canada threatened to cause a major upset last year in the Shiraz category, narrowly missing out. This year, Christopher Waters took things one step further and Canada triumphed with one of the most hotly contested and sought-after trophies of the challenge – The Shiraz Trophy 2018. Congratulations to Laughing Stock Syrah 2016,” said Ross Anderson, Director, Six Nations Wine Challenge.

Sunrock Vineyards also took a Double-Gold with their 2015 Shiraz and Black Sage Vineyard earned a Gold for their 2015 Cabernet Sauvignon.

“We are extremely proud of our winemaking and viticulture teams as their passion is represented in each of these bottles. It’s exciting to see Canadian wines continue to prove themselves and shine on the world stage,” said Paul Kassebaum, Senior Vice President, Winemaking and Operations, Arterra Wines Canada.

The Six Nation Wine Challenge is unique and one of the most prestigious annual wine shows in the world. The challenge engages one of the leading wine critics in each of the six nations; Australia, New Zealand, USA, Canada, Chile and South Africa, to invite the top 100 wines the country offers for judging. The six critics then form the panel of judges that assess the 600 wines in Sydney, across 16 classes, to find some of the greatest wines of the new world producing nations.

Christopher Waters, co-founder and editor of VINES Magazine and head judge of the InterVin International Wine Awards is Canada’s representative at the Challenge.