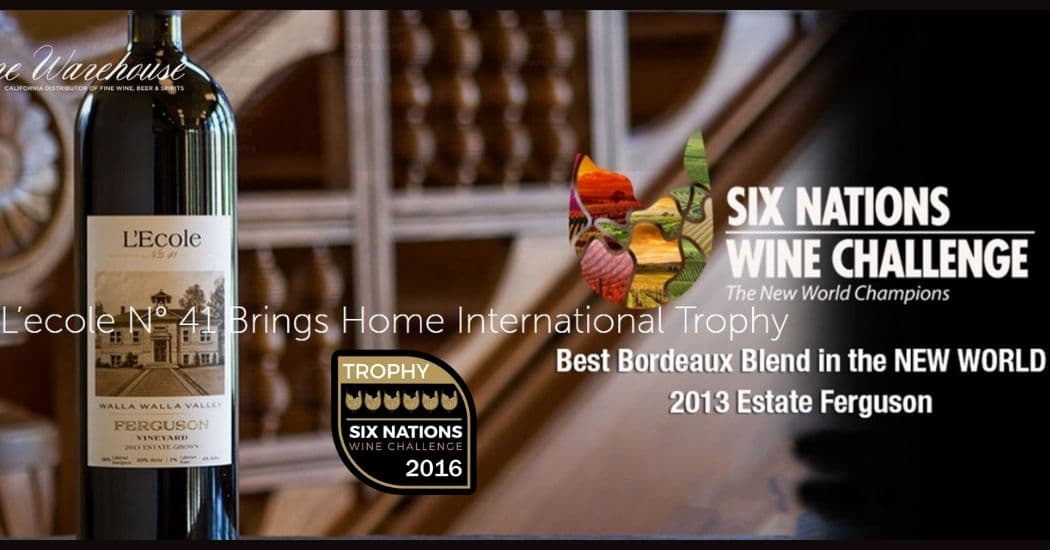 For the second time in three years, L’Ecole N° 41 has earned an international trophy for its red Bordeaux blend, Estate Ferguson, at a prestigious global wine competition.

Six hundred wines from the U.S., Australia, New Zealand, South Africa, Chile and Canada were entered in the Six Nations competition by invitation only.  Of those, only 15 wines earned a Best in Class trophy.  Six of the most important voices in New World wine, one from each participating country, nominated their Top 100 wines for the competition.  Jon Bonné, an influential and widely read American wine writer, represented the U.S.  He was in Sydney to judge the competition in August, describing the red Bordeaux category as one of the “competition’s strongest.”

“This is a tremendous honor, not only for L’Ecole but also for Washington State and the Walla Walla Valley,”

The 2013 Estate Ferguson is a blend of 56% Cabernet Sauvignon, 33% Merlot, 7% Cabernet Franc and 4% Malbec.  Ferguson Vineyard is a high elevation, 42-acre site rooted in fractured basalt rock formed by ancient lava flows that blanketed the area 15-million years ago.

Founded in the Walla Walla Valley in 1983, L’Ecole N° 41 is one of Washington State’s first artisan family owned wineries.  Housed in the historic Frenchtown schoolhouse depicted on the label, L’Ecole has earned international acclaim for producing expressive, distinctive wines reflective of the unmistakable typicity of Washington State and the unique terroir of the winery’s Walla Walla Valley estate vineyards.