Grace Farm Reserve Cabernet among the best at Six Nations 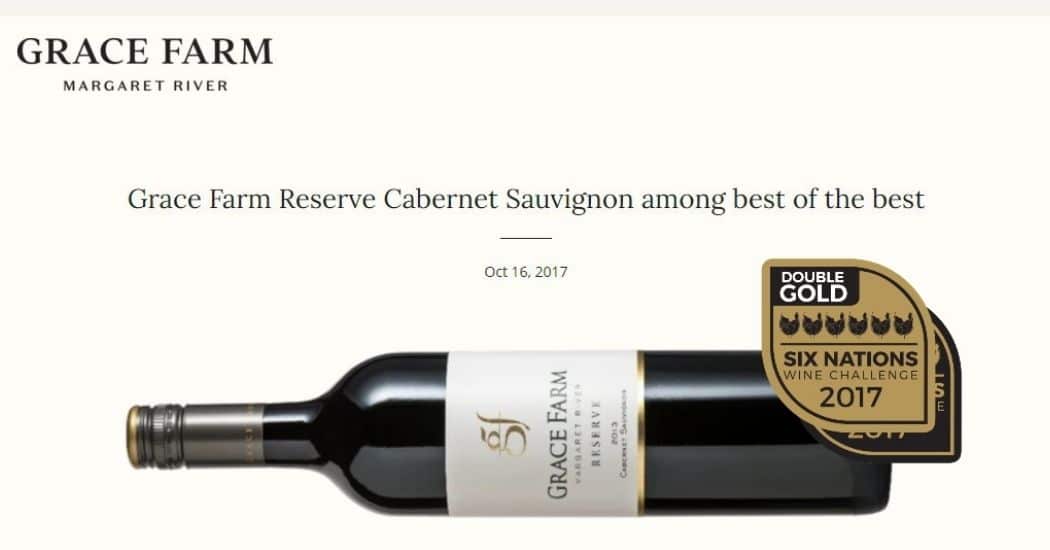 The award was announced at a trophy dinner, held in Sydney on Wednesday night. Grace Farm was ranked third in the cabernet sauvignon class after two significant US producers, Col Solare and Stag’s Leap Wine Cellars. It came in ahead of renowned Victorian producer Brown Brothers, which also won double gold.

The Six Nations Wine Challenge is a Sydney-based wine show that uses an international judging panel to compare the very best wines from six countries (Australia, New Zealand, South Africa, Chile, Canada and the US). This is the 15th year of the competition.

Entries from each country are selected by a wine expert. Australian Judge and well-known journalist Huon Hooke selected the Reserve Cabernet Sauvignon 2013 in his list of 100 best Australian wines to represent the country in the 2017 Six Nations Wine Challenge. He selects a maximum of 10 wines in any of the 16 different classes.

Grace Farm owner John Mair said: “Being invited to participate in this high-profile, international wine competition was in itself a huge compliment. Winning double gold has added another endorsement of the exceptional quality of this wine.”

The Six Nations Wine Show is more than a conventional show. The role of judges in choosing the participants leads to a process of selecting the best of the best. A selector or judge from each of the six countries makes up a list of 100 of the best wines produced. Bob Campbell, New Zealand Master of Wine, notes: “Because the wines are all selected by each of the judges, the standard of wine quality must surely be higher than any competition of this size in the world.”

All participating wines are served blind to the Six Nations judging panel. The judges’ marks are recorded and at the end they are added together to be able to declare a winner in each class, a runner-up and the top country by class.

All entries to the Six Nations Wine Challenge will be seen by members of the trade and hundreds of consumers following the trophy dinner in Sydney.